Summit is located along Highway 567 northeast of the Town of Cochrane (or legally defined as W 1/2 31-26-3 W5M) and is +/- 131 ha (+/- 323 ac). Mountain Ash Limited Partnership (MALP) intends to operate an aggregate operation within a portion of this land. The area surrounding the proposed project site includes an evolving mix of agricultural, farmsteads and business land uses such as natural resource industrial, oil and gas wells, and highway business development.

A Master Site Development Plan (MSDP) was submitted to Rocky View County in summer 2020. The MSDP complies with the relevant policies of the County Plan (Bylaw C-7280-2013) and includes a land use amendment to change the use of the land from agricultural to Direct Control (DC) to allow for an aggregate extraction. The draft bylaw received approval on March 2, 2021. A Development Permit application was also submitted for review and received approval on July 13, 2021.

MALP submitted a Code of Practice for Pits application as a next step in the process. A decision is expected in winter 2021-2022.

On-site operations planned for the project include stripping topsoil and overburden materials, mining the underlying sand and gravel, and eventual reclamation of disturbed areas.

A portable scale will be installed at the entrance to the site along Range Rd 40, south of the intersection with Highway 567. All sand and gravel will be excavated by a front-end loader and fed into a portable crushing and screening spread that will operate within the site as demand for gravel occurs. Aggregate product will be loaded onto trucks from the stockpiles to be conveyed through the scale house prior to being hauled to regional markets.

Aggregate products will be crushed, screened, and shipped to markets around Balzac, Calgary International Airport and north Calgary growth areas. Mountain Ash anticipates a 30 to 40-year operating period depending on market conditions. Development permit approvals will be required to support each phase of the proposed aggregate operations. 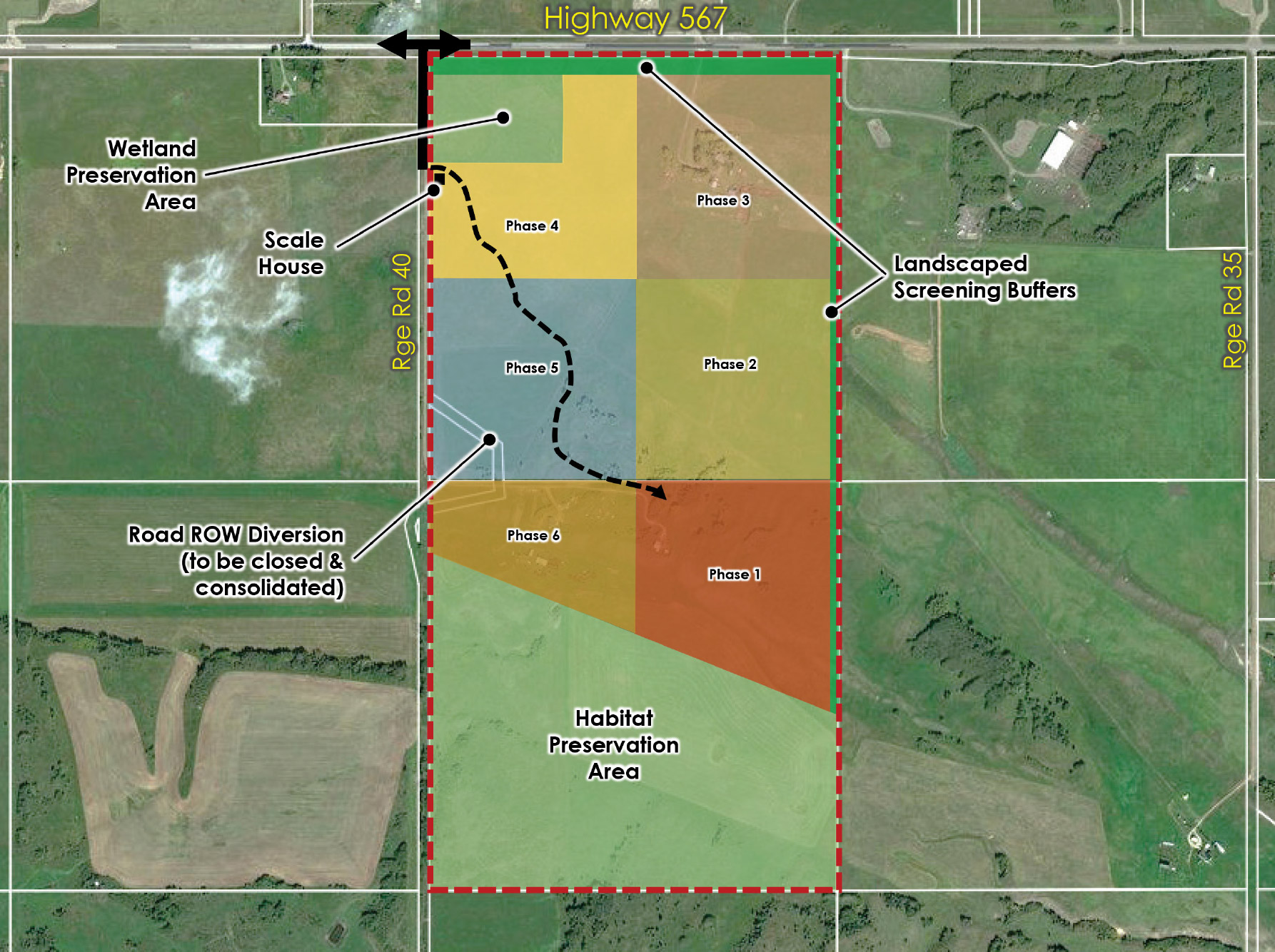 Watch a video of the proposed development plan 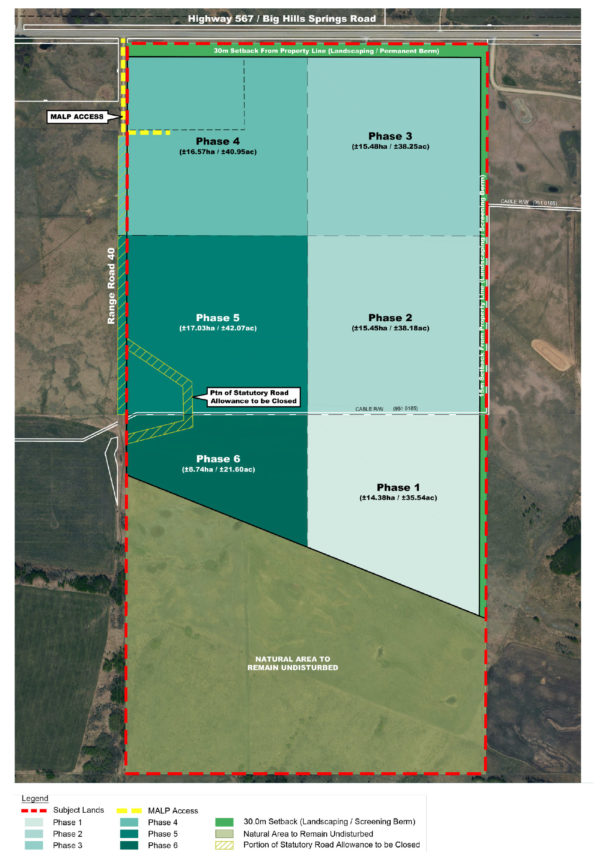 As illustrated below, operations will begin in the Phase 1 area In the SE corner of the site, and will progress in a northern direction before shifting westerly and eventually southerly parallel to Range Rd 40 and concluding within the SW corner of the site.

As part of development permit approval conditions for Phase 5, Mountain Ash will apply to close the existing undeveloped Roadway Plan 552 BM to consolidate the land.

Typical extraction and aggregate production within each phase are expected to include support from one portable crusher, one loader, one bulldozer, and three scrapers.

Potable water and sanitary servicing will be supplied by portable facilities managed by Mountain Ash via a local contractor. Similarly, waste refuse facilities will be provided onsite and removed on a weekly basis and transported to an approved waste management facility.

A scale house and administrative office will be constructed on site in a suitable location to ensure safe and effective on-site logistics.

Hours of operation are expected to occur Mondays – Fridays from 7 AM to 7 PM and Saturdays from 7 AM to 5 PM. No aggregate operations (including crushing activities) will occur on Sundays or Statutory Holidays. 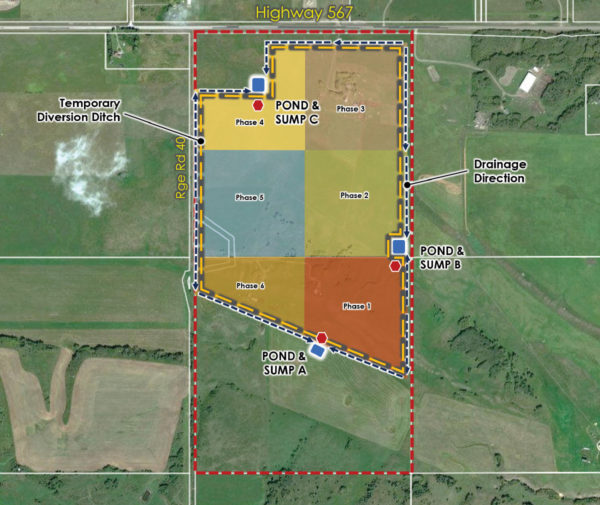 As illustrated by the figure shown here, Mountain Ash will manage stormwater within the site to:

The strategy to manage surface drainage within each phase of operations includes: 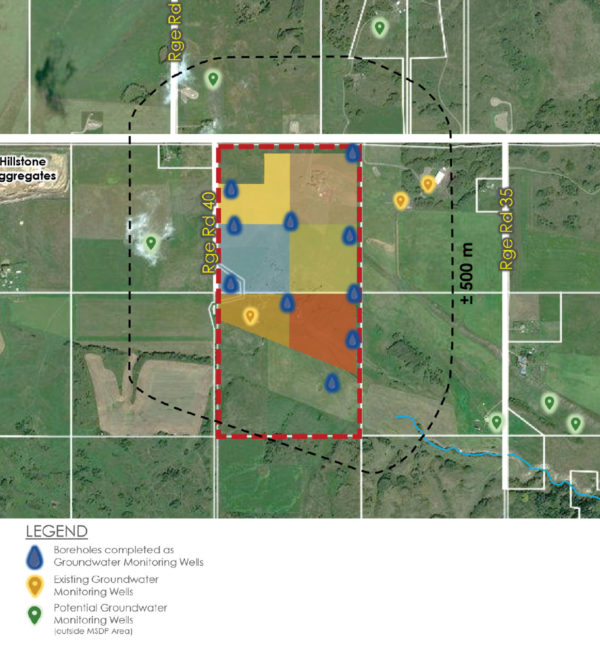 Mountain Ash prepared a Hydrogeological Impact Assessment (HIA) to address potential effects of an aggregate operation on local groundwater. The purpose of the assessment was to determine if the project would affect:

The HIA indicates that the proposed project will not pose any significant or adverse impacts to the existing confined or unconfined groundwater aquifers underlying the MSDP area or the adjacent Big Hills Springs. To ensure there are no negative effects to local groundwater conditions, Mountain Ash will limit excavation to a minimum of 1.0 m above the depth of the groundwater table.

During the operational phase, any potential source of water pollution would be from human caused sources such as fuels, solvents, and suspended solids from reworking the material on site. The potential for these human-caused effects will be mitigated within the site by implementation of best handling practices under the Code of Practice for Pits, applicable Environmental Protection and Enhancement Act rules, and other relevant codes of best practice. 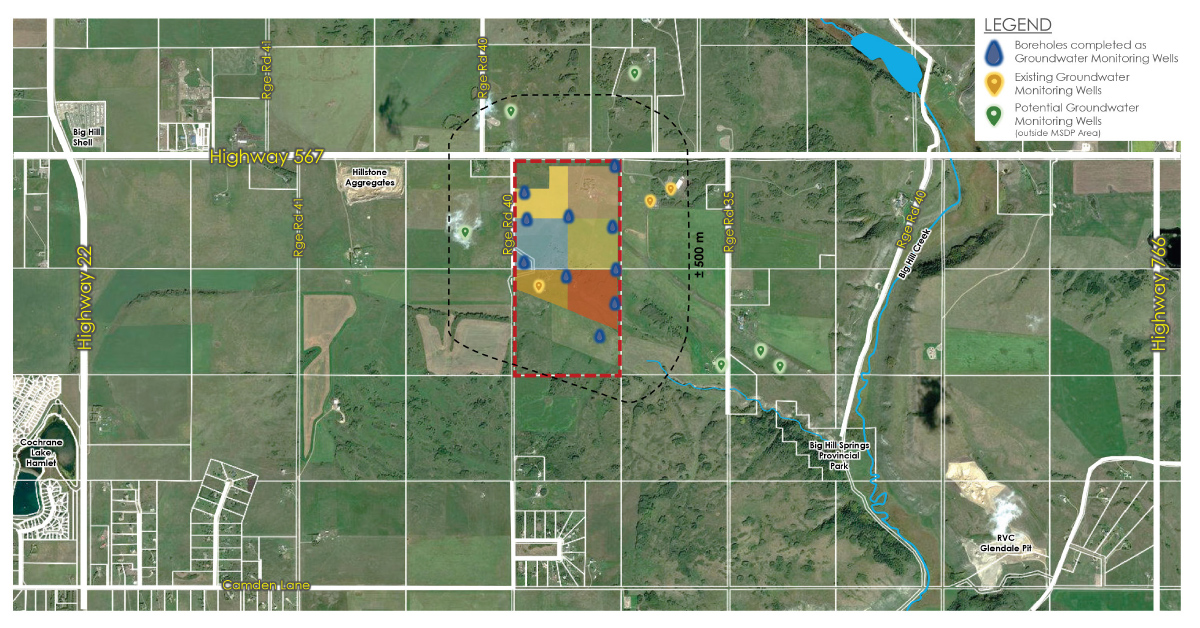 Mountain Ash is committed to reducing the overall impact of its aggregate operations on the surrounding municipal and Provincial transportation network.

As shown below, truck traffic from the Summit Pit is expected to be conveyed from the site to key markets east of the site, such as Balzac, the Calgary Airport and the north Calgary growth areas via Highway 567. Highway 567 is a provincial high load corridor and ideally suited to accommodate aggregate resource hauling activities. 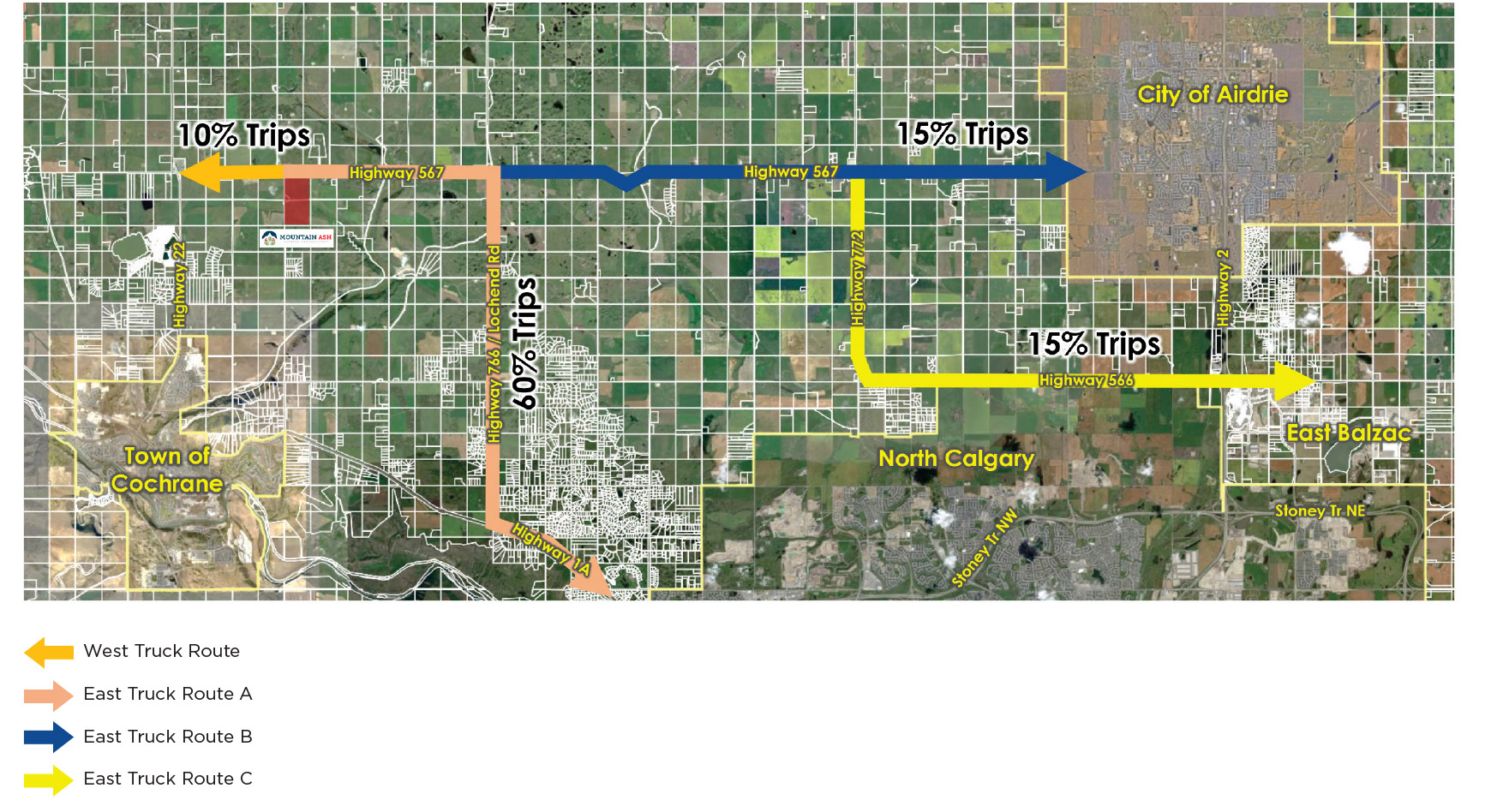 Reclamation will be completed in a phased approach and will follow closely behind discontinued mining operations, with a maximum of +/- 40 acres open for excavation at any time. The site will be returned to agricultural uses upon completion.

The objective of the final reclamation plan is to return the land to an equivalent agricultural land capability after operations are complete. Interim and post reclamation land uses will be agriculturally based in keeping with the historical grazing and pasture activities. No ponding or standing water will be left on the landscape as part of the operations.

During reclamation activities, topsoil and overburden materials will be removed from stockpiles and placed over the reclamation zone. The overburden materials will be placed first with topsoil spread on top to form the surface layer. To optimize efficiencies, efforts will be made to directly apply the overburden and topsoil materials from expansion areas to reclamation zones as opposed to stockpiling the materials in a storage area. Replaced topsoil will be seeded with a vegetation seed mixture as soon as practical to help control erosion and weed growth. Determination of seed mixtures will be based on proper land management practices, such as planned crop rotations and/or grazing schedules. Following seeding, the operator will conduct annual inspections to measure the success of the re-vegetation process.

A monitoring and maintenance plan will be developed and implemented to assess the success of reclamation. This would include field identification and documentation as well as the preparation of a report. 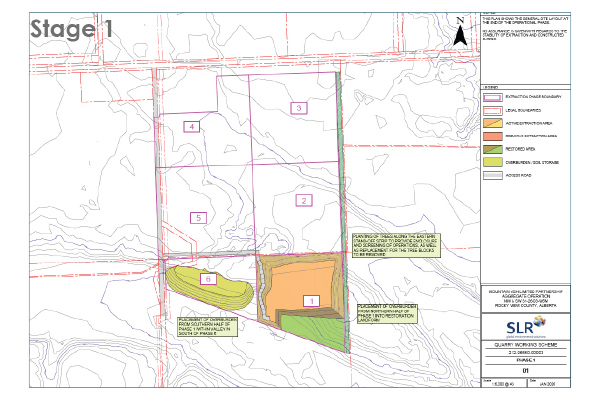 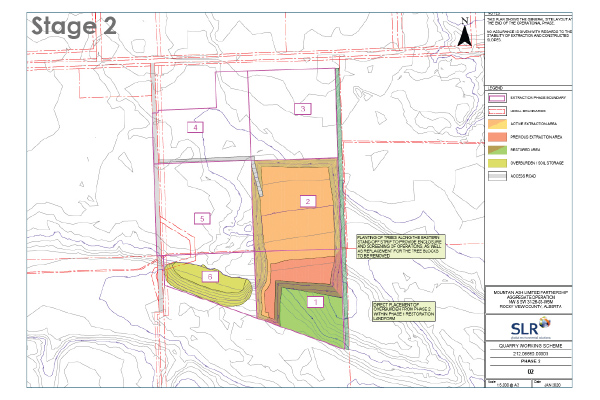 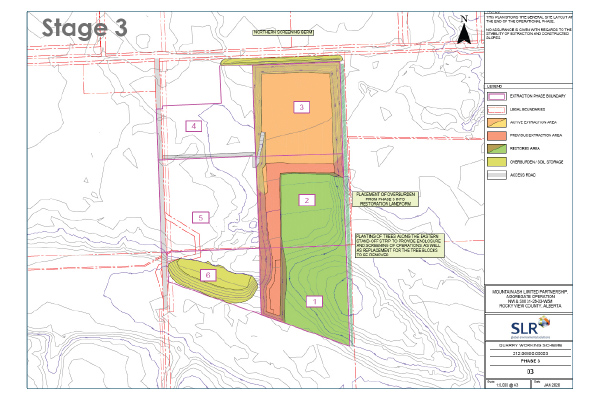 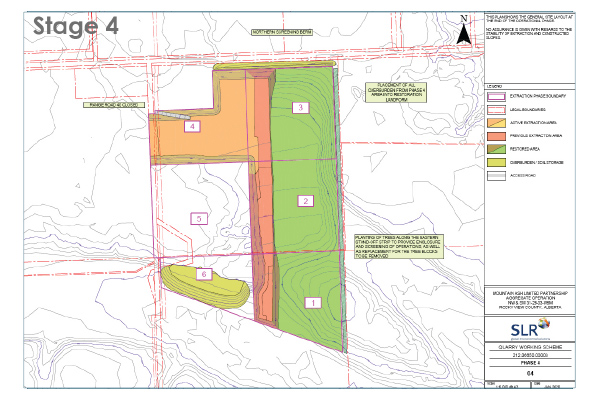 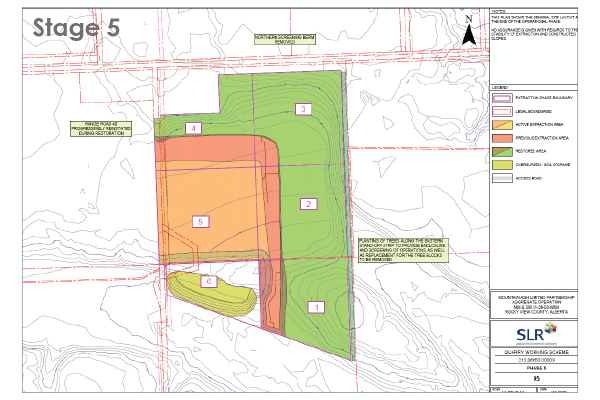 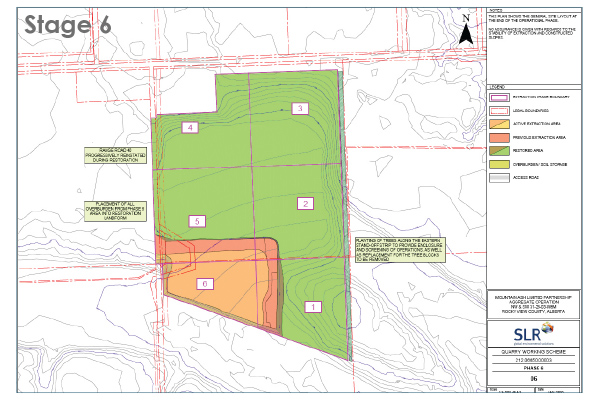 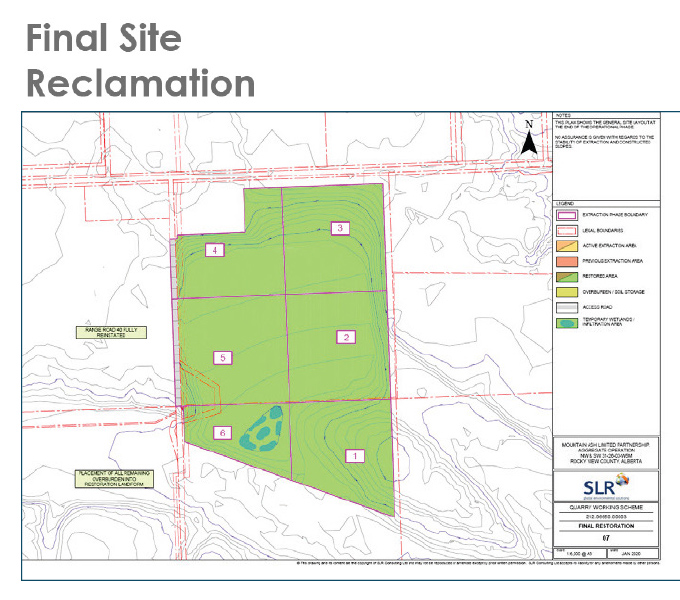 Mountain Ash acknowledges that effective dust control measures is important to maintain air quality and is committed to maintaining air quality within and in vicinity of the MSDP area throughout the lifespan of aggregate operations. Mountain Ash will provide the County with an Air Quality Assessment and Dust Control Plan at the development permit stage in accordance with applicable policy.

Mountain Ash prepared an Air Quality Assessment to measure the anticipated emissions caused by the activities and operations of the proposed operation, including diesel combustion products such as sulphur dioxide (SO2), fine particulate matter, carbon monoxide (CO), oxides of nitrogen (NOx), and fugitive dust emissions from pit operations including total suspended particulates (TSP).

Dispersion modelling was also completed and results (at the project boundary) showed there were no predicted exceedances of the Alberta Ambient Air Quality Objectives (AAAQOs) for any modelled compounds and any averaging period. The predicted maximum concentrations at the sensitive receptors are all less than the AAAQOs. Expected TSP concentrations will likely be lower, as the residences are surrounded by partially wooded areas and bushes which trap dust.

Some operating best-practice options were applied to reduce dust (TSP) emissions: the application of Calcium Chloride (CaCl2) to unpaved roads for dust suppression, adding shrouds to conveyor drops and watering mine surfaces. To avoid TSP exceedances along the property boundary, crushers should be located at least 190 m from the east site boundary and 140 m from the other site boundaries. 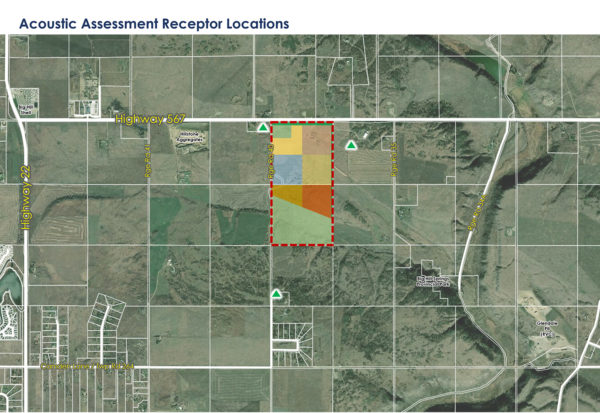 The County does not have a standard method for conducting aggregate operation noise measurements, however, the County regulates noise nuisance through the Noise Control Bylaw (C-5772-2003) which states that no person shall “make, continue, cause, or allow to be made or continued any excessive, unnecessary, or unusual noise of any type” and that noise must be “minimized as much as practicable.” This Bylaw does not prescribe quantitative limits for noise emissions; therefore, Mountain Ash prepared an Acoustic Assessment to assess the potential sound generated from the proposed operation in relation to surrounding receptors. As shown here, sound monitoring was completed at three adjacent locations to provide a reliable representation of the existing acoustic environment and to determine the operational sound level at each noise sensitive receptor. Monitoring was completed over multiple days, including a weekend. The predominant sound source at each monitoring location was road traffic from Highway 567 and local residential sound, with occasional sound from the active Hillstone Aggregates operations, which were not dominant.The operational sound at the nearest noise sensitive receptors is expected to be below the criteria for all phases with mitigations and best practice employed. As required by the County’s Noise Control Bylaw, noise emissions would be minimized as much as possible. The results of this analysis indicate that noise generated within the MSDP area will be at or below 65 decibels, measured at the property line and at the nearest adjacent dwellings.

As shown In the phased mine plan map, a significant portion of the south western section of the MSDP area will not be disturbed and left in a natural state to respect the environmental integrity of the valley feature that traverses the site from northwest to southeast. Additionally, the existing wetlands situated within the northwest corner will be retained and are not expected to be disturbed.

Mountain Ash will inspect the MSDP area for noxious and restricted weeds as defined by the Weed Control Act and regulations and applicable Rocky View County Land Use Bylaw regulations. Herbicide may be applied to weeds as controlled under the Provincial Code of Practice for Pesticides and the Environmental Code of Practice for Pesticides. Mountain Ash will engage with the RVC Agricultural Fieldman on soil handling and weed control management techniques employed during operations.

Mountain Ash prepared a Visual Appraisal to assess the visual impacts the proposed operation will have on existing building sites within the vicinity of the subject lands as well as those that will pass by the site on Highway 567. The report indicates that, although the proposed development will disturb the site’s existing landform and vegetation, the overall visual impression provided from the perspective of the public driving through or passing by the site will remain mostly unchanged, given the phased development approach, installation of landscaped screening berms, and progressive reclamation activities proposed.

Be sure to reach out to us today.